by admin
in Press 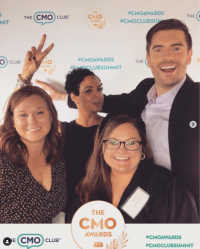 (EMAILWIRE.COM, January 06, 2022 ) LOS ANGELES, CA – Every year, countless organizations across the globe honor the best in their groups, industries, and professions via awards given to those who help drive their professional forward, and one such ceremony is that of The CMO Club Awards, which honors the top innovators of the marketing industry.

The CMO Awards, which were originally established in 2013, is the first and only award of its kind. The CMO Club community serves as a beacon for senior marketing executives to come together, share ideas, become newly inspired, and to also solve their toughest challenges in the marketing world. The exclusive club prides itself on being the most innovative and engaged community of senior marking leaders in the world, and was founded by marketing veteran, Pete Krainik in 2008. To this day, the club contains more than 1,000 members, with chapters in over 30 cities worldwide.

This year, dynamic peers from all walks of life threw in their nominations for the 2021 CMO Awards. Some of the this years winners include Deborah Yeh of Sephora, who received the CMO Equality Leadership Award; Everette Taylor of Artsy, who received the CMO Innovation Award; and Kathie Jonson of Talkdesk, who was one of the recipients of the CMO Transformation & Growth Awards.

Step and Repeat LA is an independently-owned, one-stop-shop red carpet event company that provides Media Walls and photo-op backdrops for every type of event. From high-profile events to intimate gatherings, Step and Repeat LA also provides custom design, as well as in-house printing and complete setup and take-down services.

Antimicrobial Plastics Market worth $66.7 billion by 2026  Exclusive Report by MarketsandMarkets

MENANEWS provides press release distribution services for businesses, organizations and other entities with the need to reach media outlets in Europe, Middle east and Africa (MENANEWS) Submit press release or contact us today.